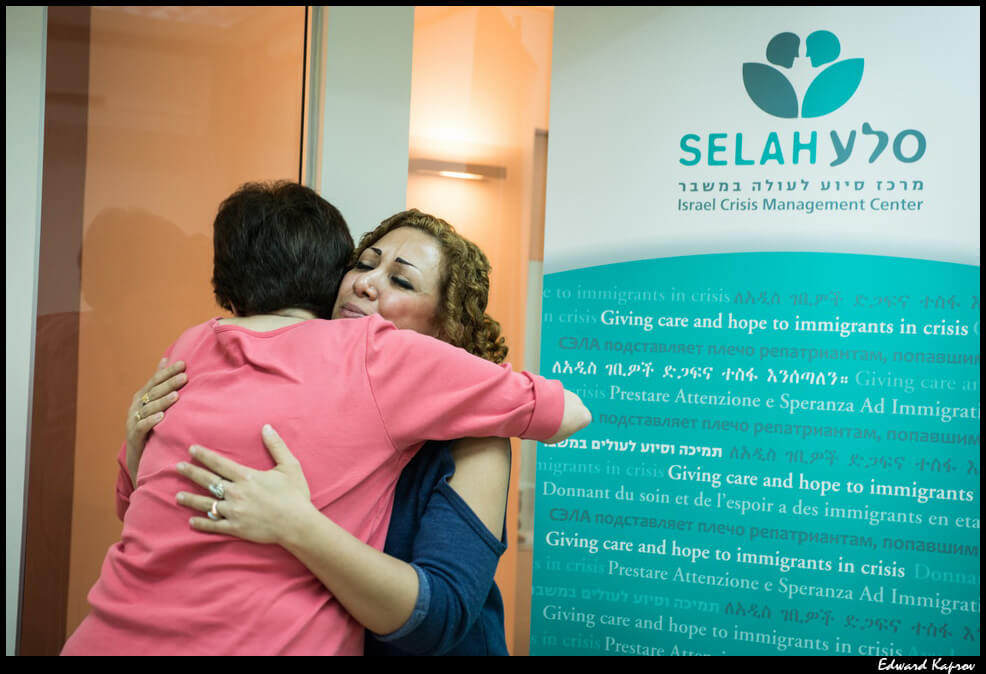 On my recent trip to Israel, I got to spend time with one of my heroes, someone who has been a key figure in one of the most moving and exciting stories of modern day Israel.  And I got to meet a young man who has overcome so much and, I’m guessing, will be one of Israel’s heroes for tomorrow.

Volunteer leader Sheryl Kimerling and I got to visit with my hero Micha Feldmann at SELAH, an organization which is funded by the Birmingham Jewish Federation and Foundation through the Federation’s Israel/World Bureau.  SELAH is an organization which helps new Israeli immigrants facing sudden tragedies. Often they don’t have a support system in place and may have trouble navigating the system in their new country.  SELAH becomes their family.

Micha is SELAH’s director of the Ethiopian Division. In his previous role as Israel’s Consul to Ethiopia, he was one of the architects of Operation Solomon — the 1991 Israeli airlift which brought over 14,000 Jews out of war torn Ethiopian to Israel in a day and a half.

Over the past 34 years, Micha has worked tirelessly to help Ethiopia’s Jewish community, touching so many families that he is affectionately known in the Ethiopian Israeli community as “Abba Micha” (Father Micha).  In future generations, this chapter and Micha’s role in it will be considered among the greatest since Israel’s rebirth.

I have known Micha for many years and his passion for and dedication to the Ethiopian community is inspiring. On a previous trip, he gave me a copy of his book, On Wings of Eagles: The Secret Operation of the Ethiopian Exodus  about his years in Ethiopia and the efforts to get these Jews to Israel, starting with the stories of many who walked hundreds of kilometers to Sudan in order to take clandestine flights to Israel and ending with Operation Solomon.  I’m an avid reader of novels, but this book was more moving and exciting than most fiction I’ve read.

The Ethiopian community has faced many challenges in its absorption into Israeli society — the journey to Israel for many was long and treacherous; families were separated for many years; thousands died among those who walked to Sudan; the society they came from is much less advanced than Israel’s; there is extreme poverty for a sizable portion of this population.

These challenges created deep wounds, which often are reopened when tragedy strikes. Sadly, this population is more vulnerable in the face of terror, war or other life altering crises.   SELAH has helped over 30,000 newcomers to Israel and the Ethiopian community represents 30% of this number.

On our visit to SELAH, Micha introduced us to an extraordinary young man, Woretaw.  Woretaw, now 23, immigrated to Israel with his family of nine as a child.  When he was 14, his father murdered his mother and then committed suicide. Woretaw, who was a sensitive and perceptive boy, felt a great responsibility to look after his beloved mother, to the extent that he wanted to stay home from school to protect her. Her murder was shattering for him.

With SELAH there at every turn to help him, he was able to learn to cope with the pain and hardship.  With great effort and determination on his part and the loving support of SELAH as his “family,” he was able not only to catch up to his classmates, but also to achieve real excellence. He and his other older siblings now share the responsibility of raising their two younger siblings.

Today, Woretaw is in the midst of his army service, works part time and attends a prestigious Yeshiva (religious school).  Woretaw also is a poet and songwriter and at his younger orphaned brother’s bar mitzvah he wrote the following, “Everything in life has its own melody — the melody of joy, of security, and victory, of smiles and love, of going forward, of truth and belief…There are also melodies of sadness and loss. You, [the bar mitzvah boy], have your own special melody — your good heart and kind nature and the way you always show appreciation to the people in your life…”

Woretaw has written a series of poems and songs in Amharic (a native Ethiopian language) and he hopes to produce a CD.  After getting to know Woretaw and seeing his incredible spirit, I know he will achieve great things in his life.  Through our Federation and Foundation’s support of SELAH’s amazing work, we have all become a partner in Woretaw’s success.  We are now all his family.